It seems that everyday now a new Bitcoin article comes out on the media that announces a spike in the value of the crypto-coin. Articles span between some “kids” that got insanely rich with small investments to the unbelievable amount of energy the all mining network consumes. Only in the last month the exchange rate for Bitcoin doubled and it’s more than 3x since 6 months ago. Is this the begin of a bubble in crypto-currencies? Is there anything we can learn from it?

I remember the first time I’ve heard of Bitcoin, it was around 2012 when I recall a lot of buzz around it. ATM machines that interface with Bitcoin wallets started to pop up in Austin and the use of it on the dark web started to really “took off”. To be honest, I was always skeptical (everybody makes mistakes) about the all thing and painted it with a wide brush. I thought it was mostly driven by the drug market (e.g. Silk Road) and a growing lack of faith towards the traditional financial systems. From then on for about 4 years we’ve had what I’d dare calling the golden era for crypto-currencies. It seemed a world of endless possibilities and application, the tech behind it was hyped and a lot of new startups born out of it like Coinbase, Coindesk etc …

After that first honey moon period a lot went through the Bitcoin ecosystem. Several exchanges fell out of favour and some straight up made a lot of Bitcoins disappear (e.g. Mtgox). Plenty of hit pieces articles were written on it: from the mystical figure of the inventor Satoshi to the end of the Silk Road. Even after all these possible hurdles the value of the “currency” kept growing and growing, from few bucks for a Bitcoin to the 10k+ value we see nowadays.

What is exactly the appeal of Bitcoin though? What can it offer that all the investors seem to think is so valuable? The limited nature of the supply (coins can only be mined through complex proof-of-work calculations requiring expensive and massive computers, the total amount of Bitcoin possible is also limited); fears about the value of fiat currencies in an era of continuous skepticism and futures; and finally the advertised anonymity. Treading the line of these main features we could try and delineate the main types of Bitcoin stakeholders. First we have people treating it as a pump-and-dump scheme that are only interested in its market price. This type would be the ones particularly attracted by its erratic and growing prices. Libertarian and anarchist would be the second type, the ones worried about the depreciation of fiat currencies that believes in an out-of-government solution. Finally there’d be the people trading in black market activities; these would be mainly the one interested in the anonymity aspect of it. The reason I leave technology-evangelist type of people out of the picture is two-fold. For once I believe they make up the minority of Bitcoin holders and more importantly I believe there are other coins which are more suitable technologically to any other type of mainstream application. For example: Ethereum with its smart contracts and Ripple for its ties with banking institutions. One other big problem I see in Bitcoin is its inability to be a good medium of exchange due to being severely limited by the high transaction cost of the network and therefore restricting the number of possible transaction in a short period of time. 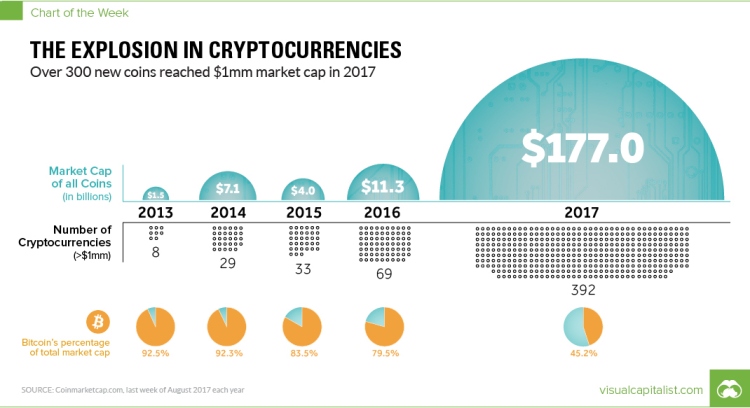 It seems that nowadays the high prices are the only thing Bitcoin has going for it. The amount of applications or startups devoted to its mainstream adoption are long gone. The trend in the value of the coin is one of the quickest appreciating asset in history. If that doesn’t sound as a bubble I don’t know what is. The consequences of the bubble popping could disastrous in the short term for all the crypto-currency ecosystem. I believe that when the value will crash it will bring disillusionment across a wide number of other crypto-coins with consequently lower prices. The ones that will remain will probably the long term winners of the landscape. I don’t see any other coin taking such a big of a market share as Bitcoin ever again, but the potential technological implication of several of them might be huge. If I had to guess Ethereum, Monero and Ripple will be the winner of this space, merely basing my assumptions on their technological prowess.

If you liked this article, please share it with your friends and let me know what you think about the Bitcoin ordeal in the comment section below!

Well, there are hundreds of them, so I won’t go through all of them, but the ones I know are:

Bitcoin (BTC): the original crypto. Uses Proof of Work to secure the chain. Recently implemented Segregated witness, which does a number of small things, but mainly it provides an increase in transaction capacity (2.5x). Has a “block” of transactions every 10 minutes.

Bitcoin Cash (BCH): a recent hardfork from BTC. Does not use Segwit, but does also increase the transaction rate (8x).

Ethereum (ETH): the number 2 crypto. Provides a platform for “smart contracts”, which allow immutable logic to be stored on the block chain. The currency “ether”, which is attached to Ethereum, has the advantage of having a very rapid blockrate (17 seconds).

Ripple (XRP): oriented to bankers and the like. More centralized than most other cryptos. Has a very large transaction capacity and an extremely fast confirmation time (just a few seconds vs an hour or more for btc).

Monero (XMR): focused on privacy. All transactions are 100% private and no one can see the balances of an address they don’t own. This comes at the price of much larger transaction sizes, which limits the transaction rate (but that limit is a ways off).

Ethereum Classic (ETC): an old hard fork of ETH (actually, ETH is the fork. ETC is the network that chose not to fork). This split happened after a large amount of ETH was stolen. ETH decided to refund those who were stolen from, but ETC decided that was fundamentally against what the network stood for.

Iota (IOT): uses a “tangle” instead of a blockchain. This gets rid of miners, fees, and scaling issues. The problem is that it requires high transaction volume to secure the network. That volume is a long ways off, so a temporary measure called the coordinator was put in place. The COO is a single node that is responsible for keeping the network synced.

Litecoin (LTC): “the silver to BTC’s gold”. Litecoin reduces the block time (2.5 minutes) and uses Segwit. It also has a larger total supply, and uses a different PoW algorithm.

There are many many more. Some of them are interesting, some are not. You’ll have to do your own research on the rest.

P.P.S. An interesting read about bubbles I suggest to you is the one called ‘Tulip mania’ that you can find on Wikipedia.

Update. Since the post publication I found also this article about a Gold mining company switching to Bitcoin mining.