One of the most interesting phenomena relative to new interaction paradigms is how mobile is increasingly pervasive in our everyday lives. We’re transitioning from the desktop-centric approach to technology of the early 00s, to a distinct mobile one. It’s interesting to notice, that in some places in the world (especially in China) mass adoption of computing devices started directly with smartphones. I think we’ve a lot to learn from them.

Recently the usage of smartphones got a surprising spike, we can use it to pay groceries, call a cab and document every little moment. Even activities the once were strictly confined to the desktop, like document creation/editing and business correspondence, are now shifting to the cellphone. Other traditional office activities such as document scanning and signing are now perfectly doable on mobile and it it seems that smartphones supplanted the home computers as our daily drivers. Let’s talk about some prevalent trends in the Chinese market to gather how recent use cases adopted here have been there all along.

In most asian countries it’s common to pay everywhere with your smartphone; from coffee shops to street markets. Before NFC chips started to become integrated in smartphones, developers found a way to make end-to-end connection easy via the integrated camera: QR codes. This square tags are the means that let’s you exchange informations between people, from contacts to payment details, and one of the main driver of the Internet revolution over there. The use is simple, just open your camera to the QR codes and let the software do the rest. This codes are really ubiquitous and make the interaction intuitive to the users. For Chinese users employing their smartphone camera to interact with the outside world is more intuitive than any westerner could ever imagine. While here we’re presented to desktop computers as our introductory device, in China, as we said, smartphones were the first tech they were ever used to. They “grew up” with a device with sensors included, you didn’t need to buy expensive webcams and install drivers, you just tap an icon and everything was already there. This factor, with a booming and ever connected economy lent itself to the implementation of the point-and-shoot camera as the main exchange of informations. Nowadays you don’t need a wallet to get around, just a smartphone, with cash becoming a thing of the past especially in the big top tier cities.

On the money side of things end-to-end payments are not the only things being completely digitised.  In a lot of cases banking is done primarily on your smartphone and utilities, taxes and similar are all completely solvent  from your favourite chat app.

With the arrival of bike sharing companies in Europe it’s not hard to guess where they were founded. The biggest companies in this sector, such as ofo and mobike, are all Chinese. They’ve been active for a while and used by pretty much everyone. Driven by the same QR code mechanism as the payments systems, they’re not but one of the example of how mobility has changed over the years. In Beijing you can pay for your metro ticket with a variety of systems: WeChat, AliPay or NFCs (all minus Apple). Here in my hometown (Florence) being able to pay for you bus ticket via your phone is seen as a privilege and burden, with higher costs than the paper card.  Instead that of a way to engage with more people and making the service easily accessible to everyone. mobile availability is still seen as something out of the norm.

The App For Everything 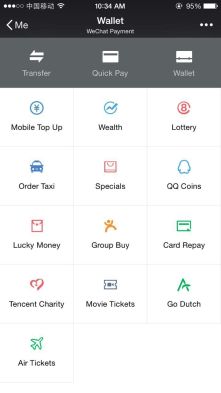 The main driver of this revolution are chat apps and not OS vendors like in the western world (e.g. Apple and Android with payment systems and their software walled gardens). Wechat (Weixin 微信 in Chinese) is one the biggest messaging application in the world, its active user base is staggeringly around 980 million. Through this application you can order a taxi, split a bill with your friends, buy movie and airplane tickets, etc.

The large number of use cases for chat applications brings several unexpected consequences. From OS features becoming increasingly irrelevant, to the vast adoptions of new technology across even older product lines. These features have been trying to sneak-in on our messaging apps for a while now. Facebook’s push for bots and payments are, in my opinion, a clear and wilful attempt to reproduce WeChat’s features. Whether they may be successful will all lie in well translated paradigms and increased acceptance.

To conclude, I think a lot has to be learned in what big Asian apps are doing. Not only on the UI perspective, but also on the adoption of different modes of action through our cellular devices. Often people thinks of China as full of copycats of big western apps, and while this may be somewhat true I think we’ve plenty of lessons to learn from them as well.

Thank you for having read my article, if you have any thoughts on the matter I’d like hearing from you! You can contact me via social media or leave a comment down here.

P.S. I suggest on the topic reading an interesting article about WeChat and the future of mobile interaction at this link.